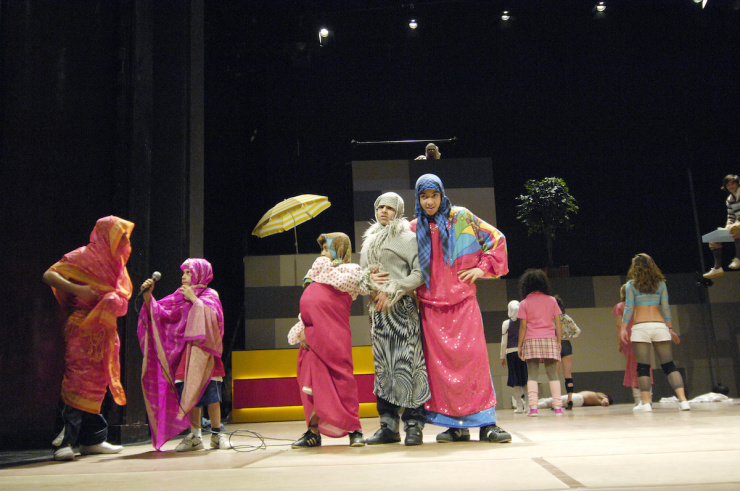 …then I press the button … and everything disappears in the dark …

At the occasion of the premiere of the Hell on Earth by Constanza Macras in Prague, I visited its court lighting designer, who is considered to be the best in Brazil and who collected many awards in Europe and America. From the dim labyrinth of the New Stage of the National Theater, I was led out by this nice and helpful man with an obligatory head lamp hanging on his neck. His view of what is or isn’t light design and how one can do it, clearly grows from the rich practical experience, not from the boundless theoretical considerations. Sergio’s view is clean and clear, as the material he works with.

Do you consider lighting design to be an art?

Well, that’s quite a tough start. I think it might be. For me personally, the light design is rather a way of expression than art. It gives me the opportunity to express my point of view, show my opinions and my feelings to what we work on.  Some will understand, some won’t. It’s a part of the communication process  with the rest of the team. I like team work, so I do theater.

Do you think that it’s possible to talk about a personal “handwriting” or style of a lighting designer? What is that?

Sure, you can talk about individual ways of thinking about light. The important thing obviously lies in the background of each of us, in his surroundings. For example, I’m from Brazil, I grew up in the heat and the sun. I cannot get rid of warm colors. I do what I can to do cool light, but I can’t. You can call it a style, but I think it’s something much stronger. Another important thing is how you learn to deal with light. When you work with a particular technique over a long period of time, you get used to its results and then you use it further on. Moreover, I believe that each lighting design is tailored to needs of the given performance. Each performance requires specific lighting, so actually I continually try to put aside something like the style. But yes, I think that a some kind of a style is ineffaceably stored in our heads, in our past, in how we see the world around us.

Do you think that the light and sound sides of a performance should be bound technically on each other?

I think they may be, but I do not know whether they should. Of course, they are deeply interconnected on the stage. When I hear some strong elements in music, I try to support them with light, but I don’t see the necessity for light and music to be technically bound. Cooperation of lighting and sound designer or composer can be very beneficial. Once I made ​​such an installation in Hellerau in Dresden together with musician Lucas Marcier. We met personally only once. We spent enormous time talking about various things, even a little about the job, but not about technical side. And we have never met again. But it was great. We have established such a connection that we both knew what we wanted to do. I like collaboration, for that I don’t do many installations.

It usually works in the way that a lighting designer comes almost to the finished performance. Of course, that you consult the director or choreographer during rehearsals, but he usually comes last and only covers the performance “into the light.” What do you think about it?

That is, of course, primarily a question of money. I think that there is no other reason for than that it’s simply expensive to rehearse the lights in the theater space. If it was otherwise, everyone would be doing it and working with lights, sets and costumes during the creation of a performance, but I think just the happiest couple has the chance. Although this is a very luxury production, there are only maximally two weeks available for lights to us at the space. So usually everything’s all almost ready, including costumes and sets and you come up with your dream idea and suddenly everyone is behind you and says, “… and I’d rather do it like this” or “… and couldn’t we light it there” ? Suddenly, you have a group of “critics” from the team behind your that doesn’t have much to do otherwise and this is often my very fragile moment, because other people have different expectations and ideas and you see for the first time at that moment in reality what you have only imagined before. So it is a bit unfair, but I’m not complaining, it’s a part of the process of creating  a performance.

Do you use some presentation software that would give you a simulated scene with lights?

No no, I don’t use it. I think it’s rather a good tool for presentation to clients, production or director, but I prefer to use drawings. I really prefer working with my eyes for the viewer’s eyes, I think that no software can replace it so far.

In the Czech Republic and in Europe in general, there is only few art schools or other institutions that would systematically educate in working with light and people get to the job in many various ways. Which was yours?

It was quite natural. I am a graduated architect. And my way of looking at the space evolved gradually. In Brazil, I worked with architects who was doing the lighting for interiors and commercial spaces as were shopping moles for instance. That was my first encounter with the light. It was very technical, but it fascinated me, for example, what tricks can be done with light to keep people in a shopping center, how it is possible to create an environment with light that is less noisy, and so on. Then I got the opportunity to work as a set designer, which made me excited. There  is a problem with architecture that you are responsible for something that is going to stand there maybe 300 years. I grew up in the capital of Brazil, which is full of modern architecture, and I know very well how people can suffer because of someone’s artistic vision. Sometimes the buildings look good on paper or as models, but when implemented, issues arise, which were not thought about by the authors before. And they aren’t already there to deal with it, because they are having a drink in Copacabana. The set design is only temporary architecture. It exists only for the time being of a performance. And I moved further with light. I can build space that lives an intense life for some time, then I push the button, everything disappears in the dark and I can go to sleep in peace. I don’t know exactly how to describe it, but this temporariness produces a very intense feeling of satisfaction in me. For two hours, I can do anything as I feel it, but no one has to live in it after that.

Do you think that it is possible to study lighting design and is it needed?

This is a controversial question. Learning is always useful. On the other hand, one cannot expect to learn everything at school … I think the importance of the school is that it creates space for discussion. I often miss some kind of a feedback from the outside. In many countries, there are no critics  who would be able to critically evaluate a lighting design. It induces an emotion in them, but they can’t describe what kind of and how. A school has something to offer in this particular regard. It will give the people the opportunity to criticize, discuss and articulate their differing opinions. Also experimenting is quite difficult in the given professional conditions. Once someone is working on a performance, which has limited time and the thing must be done, he doesn’t have the opportunity to try a variety of lights, colors and their combinations. The school is also very useful for tests with different technologies and ways to handle it. I did such workshops with small children and it was absolutely amazing how inventive they were while using the light.

Do you think that perfect knowledge of techniques and technologies is important for the creation of a lighting design?

No. It can help, but it is important in reality what you do and how. You can use profiles, mobile projectors or lasers, but in the end it’s always the same principle: an object at the stage and the light source. It’s a kind of my motto, to which I constantly return. Maybe I’m a little conservative, but I always return back to the bulb and shadow.

What do you think about the ban on the sale of Edison filament bulbs in the European Union?

I must admit that I was quite upset. I’m not sure if that what we save on electrical energy will compensate that what we lose on the mental harmony. I tried to get home-saving lamps, but suddenly all happiness left me, and when I looked in the mirror I looked sick.

So you’re one of those who ran to the store to buy a basket full of classical light bulbs?

Well, I have a stockpile in the basement of my home…

In what area do you like most to work?

I like indoor projects. I like control, I hate surprises during the performance. At the same time, I prefer a medium-size or smaller spaces as here on the New Stage. Maybe I can’t handle big ones, but it is simply difficult for me to work with them. I have a feeling that I have to do something monumental and that doesn’t suit me. Medium sized productions are also more comfortable because one travels well with them. Adaption to the other stage is more simple.

In this regard, I have no preferences. I can work in a former factory converted into a theater space as well as in the Paris Opera. Of course, it requires a different approach, but I can’t say that I wouldn’t like to work with the proscenium arch, or that I need it. In Hellerau, we did opera and it was a nightmare. The whole space was white. Everything was visible. It was really difficult to do the lights, but furthermore, now it is on a tour and basically it isn’t possible repeat the design in  different space again. I like the space with a proscenium arch. All the technology is hidden and only the magic of theater gets on the stage. I know that many people say that this type of space is dead. I don’t know, I like him.

He graduated in Architecture and Urbanism at the University of Brazil in 1983.

He participated in more than 150 international festivals with various dance and theater projects in more than 30 countries, in America, Europe and Asia.

In 1991,  he was got an award of the NEW YORK TIMES for best lighting design of the year in New York.

He lives in Germany and works worldwide.